When my children were in elementary school, our house was the house where several neighborhood children gathered after school.  Often, children were in our yard for four evenings a week.  As the neighbors were over, I listened to the games and play that kept the children engaged for hours at a time.  What I heard with particular newly created games was a give-and-take of negotiating about what the rules are.  They patiently spoke and compromised on how to follow the game.

The games could be anything from snow fights, hide-and-seek, tag, Star Wars, or anything they wanted to create.  My son and his friend thoroughly discussed possibilities of winning and defeat.  There were things that were not okay such as hitting, kicking....

Imaginative play was a constant part of the time at our house.  We had a long driveway, so the children made up hopscotch games (a bit varied from the real game). They also created a sidewalk chalk town and drove the pedal toys around to the different parts of town to do business, order food, and park.  Of course, this was all pretend, but the more acceptable it was to be creative, the more creative they became.  The kids kept expanding their creativity.

What is so important about this?  The kids were never on technology while at our house.  They created their own fun and entertained themselves.  Not only was imagination encouraged and natural for them, they also learned skills such as teamwork, compromise, assertiveness, and fairness.  They learned sometimes you win, sometimes you lose.  Don't cheat. Life isn't always fair.  They can't always call the shots and get their way, yet everyone can be friends and get along.  So many life skills.

Those years have come to an end, but fun and play in the back yard taught lessons that I see these children use in life.  Don't underestimate the value of play.  Having too much structure for children lessens the opportunity to imagine and create.  Having both structured activity and creative play is a better balance.

Popular posts from this blog

Young Life with a Brother with Down Syndrome 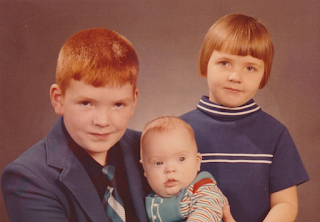 At a young age, I learned to be a responsible person.  The instinct to be a protective sister came naturally.  How could I not?  The love of a baby, in my case a younger brother, came so natural.  I couldn't imagine anyone not loving or adoring this small person.  At this time, I didn't know he had Down syndrome, but it didn't matter.  I think I was too young to understand what this even meant, and society wasn't open to those with disabilities during this time.
My older brother and I sang, talked, played, and made goofy faces with our younger brother. We loved it when we could get a grin.  He was easy to entertain, and we found him a source of amusement.  How could anyone see this child as someone who doesn't belong in society?  I later learned society generally possessed that attitude.  When my Mom and Dad first held him, they saw a beautiful child whom they immediately loved.  An institution wasn't an option.
Yes, it was difficult and a big concern of w…
Read more
June 30, 2018
Childhood Play vs. Bullying
When I grew up, we played lots of cops and robbers, tag, hide and seek with cousins, siblings, friends. We teased each one another, laughed, and played by the rules. No one whined or griped because they were teased since they also dished out some fun-loving teasing, chasing, and pranks. My younger brother was all part of this youthful experience-he was NEVER excluded. However, I have noticed that some young people want to tease and target another person with fun-loving antics, yet they want to be "untouchable." It is okay in their minds to "go after" their peers, yet can't handle when the tables are turned. This behavior can become an imbalance of power, otherwise bullying. My message is that often the person who displays this behavior and can't take any back wants power. Young people learn social skills through play. Fairness where everyone plays by the rules is a life skill for ALL. If one continues getting by with the power, th…
Read more